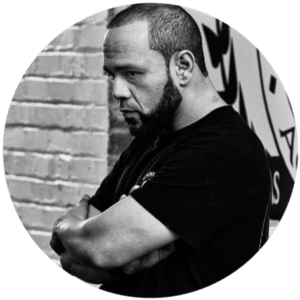 Frass Azab is the owner of Warriors Academy KC and Chief Instructor of the Krav Maga program. He is a graduate of Park University’s Criminology/Criminal Justice program, worked in Forensics, and as a member of teams dedicated to caring for violent patients in psychiatric wards. He has been a bodyguard for celebrities, and worked as a security supervisor for nightclubs in Miami and Kansas City. These professions have provided Frass real world experience utilizing his knowledge and physical skills developed in his martial arts training, giving him an array of principles and life experience that make his lessons unique and applicable.

From a young age Frass was exposed to martial arts, and never stopped. His training includes Judo, Muay Thai, Brazilian Jiu Jitsu and Filipino martial arts. He is a black rank under Nicholas Hughes in Krav Maga. Frass has competition experience in Muay Thai, and Brazilian Jiu Jitsu, earning the title of the 2012 Brazilian BJJ National Champion. Along with his knowledge of hand-to-hand practices, Frass is certified by the NRA for Pistol and Defensive Tactical shooting. 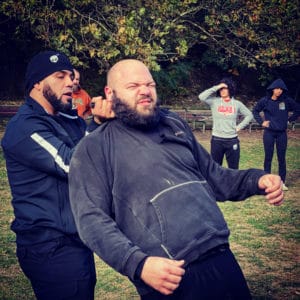 Now an avid instructor, Frass is focused on sharing his knowledge with students at his academy, as well nationally and internationally. He’s conducted training in London, England for the BKM-HQ and given seminars in Abu Dhabi and Jeddah, Saudi Arabia. Frass has also had the honor of training the Military Police in Ft. Leavenworth, KS. He is a certified Warriors Krav Maga instructor under Nicholas Hughes, a CSW instructor under Eric Paulson, a Kembative’s Brand Instructor under Kelly McCann, and an instructor under Hock Hochheim’s Force Necessary Stick and Knife Hand to Hand Combat. Frass was inaugurated into the U.S.A. Marital Arts Hall of Fame as a 2018 Self Defense Instructor, and returned to cornering MMA fighters that same year. His online Krav Maga self defense series can be found with BJJ Fanatic’s Effective Self Defense.

GIVE US A TRY!

We offer a one-time week pass for $25, giving you access to three classes of your choosing, or a one-time $10 pass for a single class in the Women’s Self Defense Program. This is a great way to experience training and see what membership has to offer! Passes can be purchased online or in person at our academy.